As a bill in New York brings the state closer to fully decriminalizing sex work, the question of legalization has once more been thrust upon the national stage.

The debate is one that's been raging for decades.

The Case for Intervention

Advocates for banning sex work contend that it leaves women, men, and unfortunately, even minors vulnerable to trafficking, exploitation, and violence. It's argued that even if we aren't in favor of legislating morality, the safety implications of sex work alone are enough to warrant intervention.

It's argued that even if we aren't in favor of legislating morality, the safety implications of sex work alone are enough to warrant intervention.

The Case for Legalization

In response to this, those who favor legalization say that the threat to safety is precisely why sex work should be legalized. "Yes, sex work carries risks, but because banning it will certainly fail to eliminate prostitution entirely, the best we can do for those involved is to legalize it. That way, it can be regulated like any other industry. Sex workers in danger will be able to seek the help of law enforcement without fear of being prosecuted themselves."

Forget the Legalities For A Second

With such deeply divided opinions, the conversation over the legality of sex work is unlikely to be resolved anytime soon. However, as everyone debates whether people can participate in sex work, we've overlooked (or disregarded) a more critical question.

Why aren't we discussing whether people should participate in sex work, even if legalization does occur?

The Women Who Choose Sex Work

To some readers, this question may seem like a pointless one. There's a common misconception that sex workers (especially women) are all victims of human trafficking or people who are so financially desperate they feel as though sex work is the only choice they have to provide for themselves and perhaps their families.

Well, there are far too many individuals in the sex industry because of trafficking, and more still who don't want to participate in sex work but do so because they believe it's their only option. There are, nonetheless, also many sex workers whose participation is entirely voluntary.

For many of us, voluntarily engaging in sex work may seem like an alien concept. But as sex work and the sex industry, in general, become more and more destigmatized, it's a mentality that's gaining popularity. 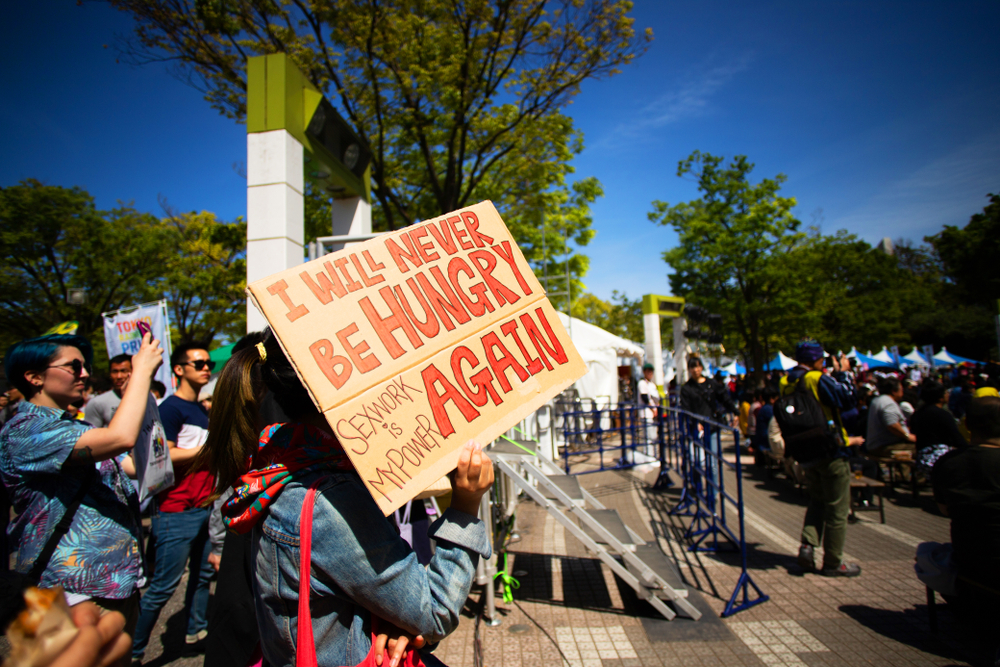 It's often said that prostitution is the oldest profession, and the incentives to participate in it have remained mostly consistent throughout history and geographies. Money has always been a draw, and for some, the sex itself is appealing. But one supposed benefit of sex work that is almost certainly unique to the 21st century is the idea that sex work can actually be a symbol of feminine strength.

One supposed benefit of sex work that is almost certainly unique to the 21st century is the idea that sex work can actually be a symbol of feminine strength.

According to certain feminists (not all, since feminism is split on the issue), voluntary prostitution can be a feminist act if it represents a woman taking control of her sexuality as well as her financial status.

That's right. In 2019, it's said that sex work can actually be empowering.

What The Data Says

It would obviously be inaccurate to say that women who revel in using their sexuality to earn an income don't exist. However, based on the data, the idea that the sex industry as a whole is empowering happy, strong, independent feminists seems doubtful.

The link between sex workers and mental health struggles is a well-documented and unfortunate issue.

Of course, one might claim that if legalization were to occur, perhaps these women would be able to receive the counseling they need. Keep in mind, though, this study of sex workers occurred in Canada, a country where a single-payer healthcare system provides access to psychiatrists and even drug rehabilitation programs.

These numbers mean that either people with mental health issues are disproportionately drawn to sex work, or that those who are already engaged in sex work are disproportionately likely to develop these illnesses. The studies available don't elucidate which situation is the case, but frankly, as far as empowerment goes, it really doesn't matter.

Whether sex work itself causes mental health problems, or whether those who are already struggling with mental health are drawn into it, it's hard to see it as an "empowering" profession. Can something really be said to strengthen women if it hurts so many of them, or preys upon them when they're at their most vulnerable?

Words of Caution from Experience

And furthermore, the question of sex work's empowerment is one that's been answered frequently with heartbreaking fervor by women who were once sex workers themselves. From women who began prostituting themselves out of financial distress, to those who even believed that it could be an easy, perhaps even fun way of earning a living, there are far too many voices out there who refute the "empowering" image of sex work some activists like to portray.

There are far too many voices out there who refute the "empowering" image of sex work some activists like to portray.

As writer Emily Eveland confessed in her piece "I Thought Sex Work Would Be Empowering and Feminist. I Was Dead Wrong.":

Emily is one of the many women who initially believed that sex work would be easy, only to eventually be confronted with a sobering reality.

The issue of sex work is not an easy problem to solve. Legalized or not, it's an industry rife with abuse, trafficking, drugs, and mental illness. And while these and other issues may be enough to caution anyone from participating in / pursuing sex work, it's important to note that whatever our positions on the subject may be, they should always have the common goal of making women's lives better.

Words of caution against the sex industry often come from a place of judgment, rather than care and understanding. Those of us who are critical of sex work must realize that helping women see the dangers of sex work (and equipping them with better opportunities) will ultimately go much further to both dissuade and protect them than simply trying to shame them.

Validating Prostitution As "Real Work" Is Ignorant and Harmful